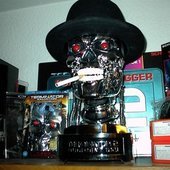 Come and join us on Wednesday 9th April at 19:30BST (or as close to it as you can manage) for Raiders of The Lost Santos, a 1980s Movie and TV themed Easter Egg Hunt and Playlist. We will meet at

General JC  is in! 🇳🇴 (I am not from Norway but that's as close to the rebel flag as I could get)